Hendon Retail Services to provide leasing and property management services for Suwanee Jubilee, a 73,521 square feet asset in Suwanee, Georgia.  The open-air center touts a sophisticated collection of service oriented businesses, restaurants, and is anchored by The Fresh Market, an upscale grocer.  Located at 1500 Peachtree Industrial Boulevard, the neighborhood specialty center caters to an average household income of over $124,000 within a 3-mile radius.

About Hendon Retail Services
Hendon Retail Services (HRS) is a highly specialized retail real estate advisory firm that takes on a principal led approach to retail leasing and management.  A collaboration between retail industry veteran’s Jackie Wammock, CRX, CLS and Charlie Hendon, HRS is founded on the principles of providing the highest level of service to all clients.

About Hendon Retail Services
Hendon Retail Services (HRS) is a highly specialized retail real estate advisory firm that takes on a principal led approach to retail leasing and management.  A collaboration between retail industry veteran’s Jackie Wammock, CRX, CLS and Charlie Hendon, HRS is founded on the principles of providing the highest level of service to all clients.

Join us at Booth #3239 on December 6 & 7 at the 2017 ICSC National Deal Making Conference at the Jacob K. Javits Convention Center in New York.

Click here to request an on-site meeting with a member of our team. 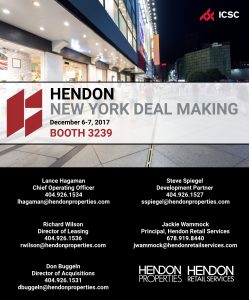 Charlie Hendon stands alongside Georgia Governor Nathan Deal and fellow members of the music industry to mark the passage of the Georgia Music Investment Act.

Charlie Hendon, an avid music enthusiast, is founder/partner in Madison Records, an indie record label out of Atlanta, Georgia.  Madison Records has its own recording studio and production team of experienced and creative producers and consultants.  To learn more, visit www.madisonrecords.com.

As investors flee the battered retail-property sector, a few brave ones are picking through the wreckage.

GBT Realty Corp., a Brentwood, Tenn., property developer, is planning to raise a $500 million real-estate fund to purchase 80 to 100 retail buildings in the next decade.

Hendon Properties LLC, a real-estate development, management and brokerage firm based in Atlanta, is also looking to raise a fund to buy weak malls and open-air shopping centers.

“The opportunistic money is circling,” says Jeff Edison, chief executive of Phillips Edison & Co., an owner and operator of more than 340 grocery-anchored shopping centers across the U.S. “They smell blood in the water.”

So far this year, retailers have announced more than 3,000 store closures in the U.S. as a result of bankruptcy filings or shifts to e-commerce operations. The few chains that are still expanding, such as discount chain Burlington Stores Inc., are opening smaller stores in wealthier ZIP Codes.

The bifurcation between healthy properties in upscale regions and slumping ones in less-wealthy areas is creating bargains for some hardy investors.

While prices haven’t fallen to distressed levels, in some cases the land value itself is worth the purchase price, the investors say. Yet most of the buyers say they have plans to improve operations and expect higher returns.

“In some cases, the needle has swung too far and we want to take advantage of it,” says Charlie Hendon, chief executive and president of Hendon Properties.

The firm plans to raise $10 million to $20 million for the fund and will join with other institutional investors that will fork out the majority of the equity in potential projects. Hendon previously has partnered with investors such as Alabama investment firm Harbert Management Corp. and Acadia Realty Trust .

In general, the acquisitions will average around $10 million to $30 million, GBT says.

GBT already has an in-house leasing team with relationships in the retail community, says Chief Financial Officer Geren Moor. “We’re looking for assets where we can add value, such as backfilling vacant spaces,” says Mr. Moor. He added that the firm will continue with ground-up development operations, though such projects have tighter margins these days.

“There are mall investors with patient capital that can wait for the existing leases to ride out and bring in other uses to reposition the property,” says Margaret Caldwell, managing director at JLL Capital Markets. “We are also seeing new investors that are interested in buying malls due to potentially high yields.”

Time Equities Inc., a New York real-estate firm, recently purchased two Tennessee malls for $53.5 million, one in Morristown and the other in Maryville, making a bet it can revitalize the assets.

Click here to request an on-site meeting with a member of our team.

Hendon Properties closed on the fully leased Class A retail property on February 3, 2017 and intends to manage both the leasing and management functions for the center.

Hendon Properties announces the Grand Opening of the new Kroger Marketplace in a ribbon cutting ceremony today at Dawson Marketplace, a 468,047 sq. ft. ground-up retail on 53 acres in North Georgia. In addition to an extensive prepared and organic food selection, this new Kroger concept will offer clothing and shoes, back-to-school items and housewares. Joining this state-of-the-art 123,000 sq. ft. Kroger will be Hobby Lobby, Marshalls, Ross Dress for Less, and Petco plus shops and restaurants. Kroger has also built its own 9-pump fuel station on the property.

Atlanta, Georgia (April 27, 2021) – Hendon Properties today announced the acquisition of Brookhaven Station, a 44,821 square foot, shopping center in the Brookhaven-Chamblee trade area, a submarket of the Atlanta MSA. “It’s an exciting time to do business in the city of Brookhaven”, says Jason Lazarus, Director of Acquisitions for Hendon Properties.  “Brookhaven Station is surrounded by explosive economic growth with numerous mixed-use, medical, and multifamily projects coming online in … END_OF_DOCUMENT_TOKEN_TO_BE_REPLACED